Islamic tradition is powerful, moreso than in Syria, Jordan or Lebanon. 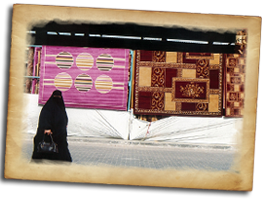 Alchohol is forbidden. Most women are traditionally veiled, many in full black with only the eyes uncovered. Men wear flowing headgear, and in Oman, they are adorned in long white dishdashas and caps. Except for winter, temperatures of 110 degrees farenheit are common.

I drove to the small Arabian town of Sifad in the Sultanate of Oman. Here, the turquoise sea meets the harsh desert mountains. Greenery is absent. An Omani man told me, "two year, no rain."

On the sand amidst villagers, goats and sheep, I assembled my kayak, loaded my gear. Then I ventured off, paddling the coast for days. The water was "big", - huge swells that ocassionally made me seasick. The sandstone cliff shorleline ocassionally opened into pristine beaches, where I camped beneath stars. In the water through my diving mask, I saw abundant colorful fish and even a sea turtle.

A day later, the sea turned coffee-brown. The clarity vanished. Receding tides left many dead fish and eels behind. Then a paddle blade broke off and sank; highly unusual in today's world of composite paddle construction. I completed the balance of the journey with one blade. This slowed my progess, and required double energy.

Days later I was told the coffee-colored water was due to a massive influx of "red tide", a toxic algea bloom that rarely occurs in December.

Historically, Arabaia has challenged the traveler. This hasn't changed.