Honoring a Select and Fearless Group of Combat Pilots

Jon, I can't begin to put into words how fortunate I am to have been able to work on the T-28 restoration and exhibit project with you. It has been an honor to be among dedicated pilots, historians and people who simply have a love for the realm of aviation. 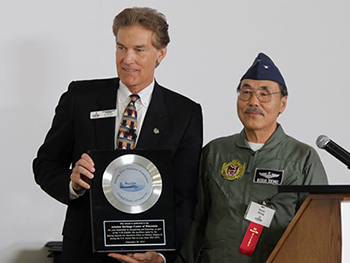 Never have I been graced with such diverse and selfless group of people such as yourself who would go to extra lengths to make someone else's dream become a reality.

Between May 2012 and September 2014, Jon Helminiak founded and led a major aircraft restoration and exhibit project at the Aviation Heritage Center of Wisconsin.

The T-28 exhibit honors the Hmong pilots who flew the North American T-28 "Trojan" and other aircraft from remote airstrips in support of American CIA covert operations during the U.S. Secret War in Laos between 1967-1975. With the help of T-28 airshow pilot Paul Walter, Jon found and acquired North American T-28 aircraft, BU (Bureau Unit) #138192, that was used to train Hmong pilots to fly at Udorn RTAFB (Royal Thai Air Force Base) Thailand, as part of Operation Waterpump.  After receiving many approvals for the exhibit, EAA (Experimental Aircraft Association) Chapter 766 began a six month restoration effort or the aircraft.

The Hmong T-28 Exhibit is the only exhibit of its kind in the nation that recognizes the sacrifice made by the Hmong pilots in the name of freedom to defend their homeland during the Vietnam War. The exhibit was dedicated at 2:00 p.m. on Saturday, September 20, 2014, at the Aviation Heritage Center in Sheboygan Falls, Wisconsin and attended by U.S. Senator Ron Johnson (R-WI). Other men who are honored by this exhibit are the Ravens (a brave and select group of clandestine American pilots who flew as Forward Air Controllers alongside the Hmong in Laos), and the T-28 Instructor Pilots of Det. 1, Special Operations Wing 56, who taught 37 select Hmong pilots to fly the T-28.