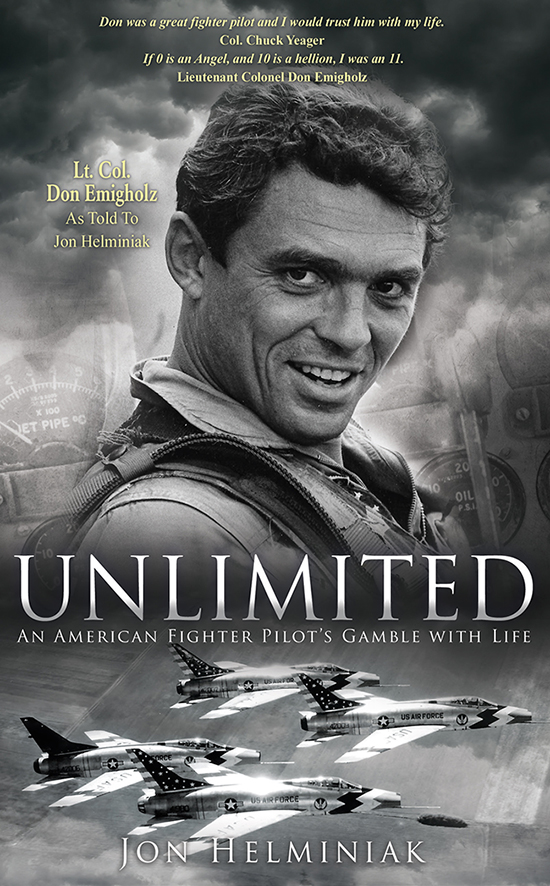 Don was a great fighter pilot and I would trust him with my life.

I have known Don Emigholz for more than 60 years. He is a warrior and outstanding fighter pilot.
When we go to war I want him on my wing.

In addition to being an exceptional fighter pilot, Don was congenial,
smart and adventurous. We became best friends.

Unlimited: An American Fighter Pilot's Gamble with Life, tells the story Lt. Col. Don Emigholz, an Air Force fighter pilot who rose against all odds and lived a life of excitement, danger, and achievement.

His friend Chuck Yeager regarded Emigholz as his equal. Future astronaut Ed White mastered fighter jets under Emigholz's instruction. His fighter pilot colleague (and future renowned author) James Salter proclaimed, "If Emigholz would have engaged in air-to-air combat, he would be an immediate ace."

Emingholz piloted the hottest fighter jets of their time, the F-84, F-86, F-100 and the F-4. While stationed in Germany, he flew with the Skyblazers, the U.S. Air Force Aerial Demonstration Team whose routines were the same as the Thunderbirds.

During combat, training, and air shows, he managed grueling flight conditions and emergencies with nearly super-human calm. He was only one of 18 men selected to “instruct the instructors” on how to teach airmen to fly the F-4 Phantom, one of the mainstay combat aircraft of the Vietnam conflict.

Both in and out of the cockpit, Emingholz never throttled back. His actions occasionally risked court-martials. He nearly died pushing his Porsche and Jaguar automobiles to their limits. He reveled in liquor and beautiful women. When transferred back to the United States from duty in Europe, he and a buddy “went home” by sailing a small boat across the Atlantic Ocean.

This page-turning, profound work is Emigholz’s remarkable journey, told in his own words,
as written by Jon Helminiak.